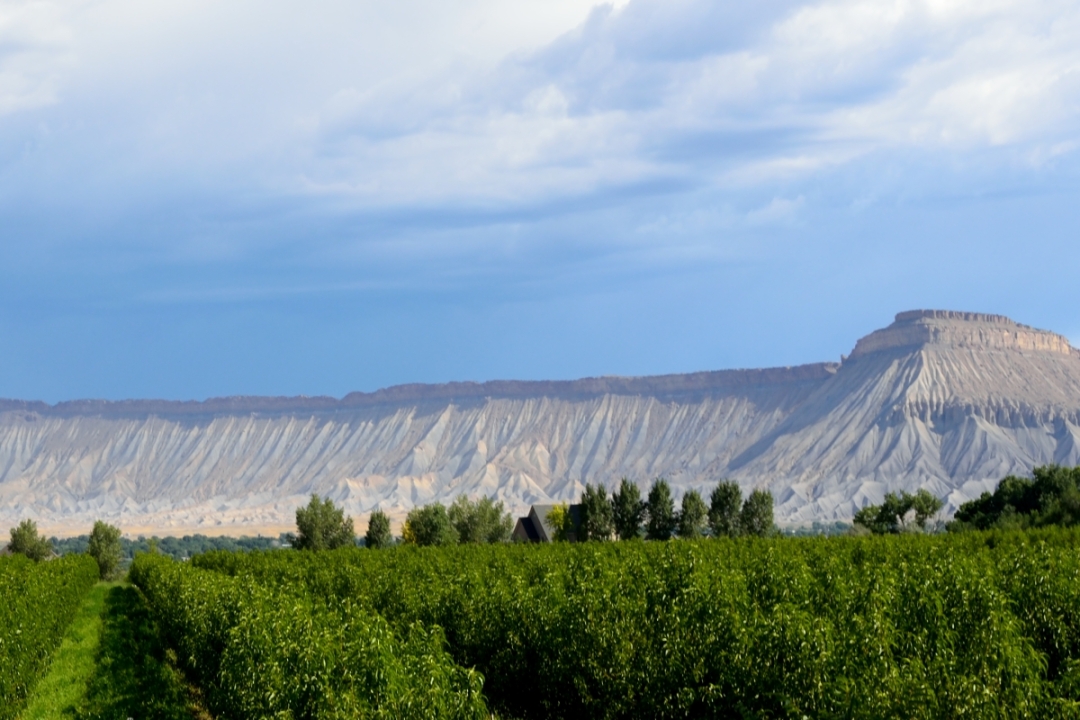 The history of Palisade peaches began with pioneers, explorers, and town builders who breached the backbone of the continent—the Rocky Mountains—in the Territory of Colorado. The question is how did they know in the 1890s that peaches would be a juicy contributor to Colorado’s $40 billion plus and growing agriculture industry of today?

They had vision, motivation, and a market.

Mining interest cut into the mineral-rich mountains of Western Colorado, extracting gold, silver, and coal. They laid out communities close to their mother lodes and far from their markets. Enter next the railroad companies like the Denver & Rio Grande (D&RG) and the Colorado Midland Railway (later Railroad) who set tracks within the precarious passes to export the precious commodities. The BLM’s Cultural Series No. 10 by O’Rourke, Frontier in Transition, explains:

“The construction of railroad lines in southwestern Colorado during the 1880’s and 1890’s was determined by the desire to connect gold and silver mining camps with the rest of the state, but was also motivated by the necessity of securing locomotive fuel from the many rich coal fields in the area.”

“It is uninviting and desolate looking in the extreme.” That is what the Denver Tribune wrote in 1880 of the Western Slope, as cited in Ingersoll’s legendary 1885 book Crest of the Continent.

Yet, elephant-skin colored cliffs and dusty, brush-covered terrain is not what Colorado agriculture and irrigation expert William E. Pabor saw. He writes in his twelve-year agriculture study Fruit Culture in Colorado, published in 1883, “We see, through the mists of the present, the fruit-lands of the future.”  His extensive interviewing of fruit growers, coupled with his knowledge of irrigation opened his eyes to the possibility of a fruitful future in Western Colorado’s semi-arid landscape.

The world was moving west at a pace as fast as the railroad could lay tracks. Once the U.S. government relocated the Western Slope Ute Indians (again), the west was open for business. Town founders like George Crawford (Grand Junction) and Pabor (Fruita) set up orchards and communities. They, among others, recognized that the isolated Western Colorado was ripe for development. They untied their motivation with their vision to tap into the nearby market.

“The miners pay cash. The harvest gathered from the soil, under the genial influence of the sun and water, is as golden as that taken from the hills, whose supposed wealth attracts so many prospectors…. The mines furnish a very profitable market, and towns are springing up in every direction,” Pabor wrote, adding that food imported from California, Utah, Kansas, and Nebraska “ought to be raised at home.”

As so it was. In the 1880s, and as the end of the century neared, Harlow, Bowman (owner of the peach-picking sack patent), Blain, and Steele planted the roots of an iconic legacy.

This legacy is celebrated each year in August at the Palisade Peach Festival in Riverbend Park. The Palisade Chamber of Commerce, the Palisade Historical Society (run by chairperson Priscilla “Bowman” Walker), and author of Western Colorado Fruit & Wine: A Bountiful History will honor that history at the 2015 festival August 14 & 15th with a special “Palisade’s Peach Past” booth—a journey through the people, places, and tastes that have made Palisade a juicy destination. 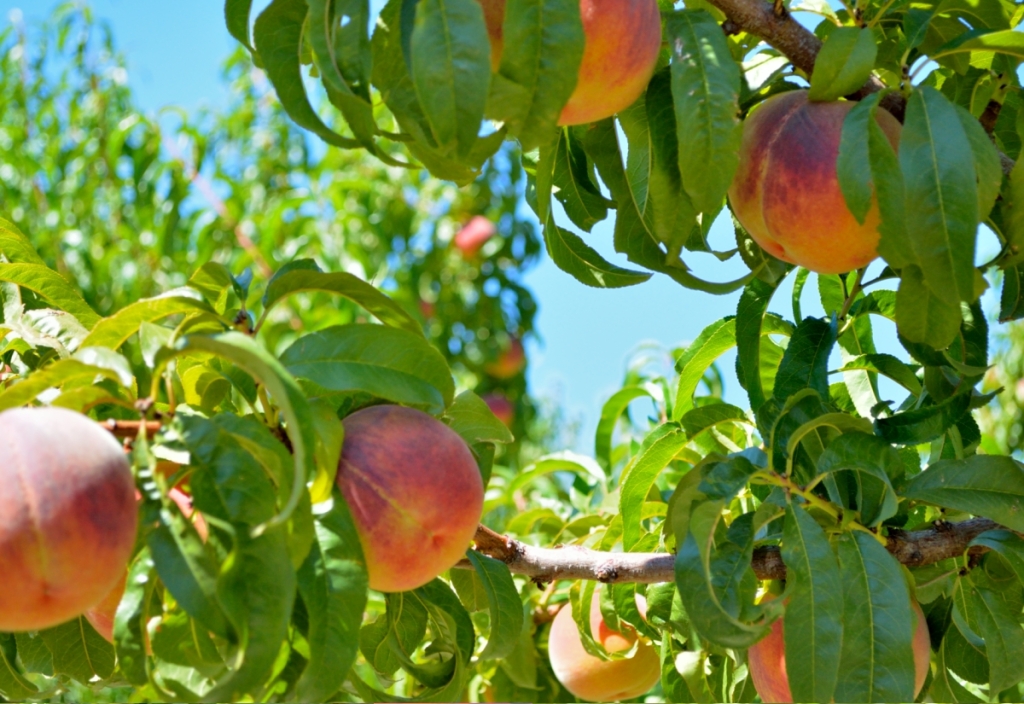 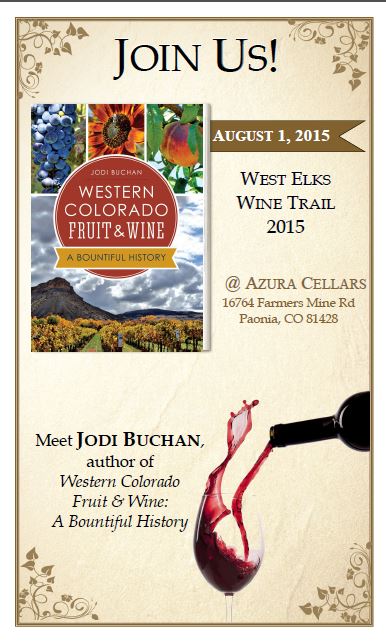 My first signing for “Western Colorado Fruit & Wine: A Bountiful Heritage” is less than a week away. The calendar is filling in with more. People say to me, “How exciting.” Well, sort of. I love to write. I love to learn things. I love to Eat, Drink, Cook—my version of Elizabeth Gilbert’s journey that does not require vaccinations or a passport.

Here is what Mary Janice Davidson says about book signings: “A book signing can be (is!) terrifying. It’s like throwing a party and being certain no one will come …  pens clenched in sweaty hands, smiling brightly (baring [my] teeth, anyway) at every would-be buyer who strolled past …  and not look like a depressed vulture waiting for something to die at my feet.”

Davidson and Eric Gelb, author of “Book Promotion Made Easy” (whose book signing audiences have numbered zero to 200), both say the same thing, though. Have fun with it. Enjoy the ride.

For me, even more than signing jitters, is the idea that my book is a vehicle—with a word count—for the stories of other people and places. I kept that notion with me in the hours, days, and months of research, fact-checking, writing, and revisions while the peach trees and vines lay dormant under the snow. I was reminded that I was a voice for old and new pioneers, for fruit and wine, for profit and nonprofits deeply rooted in the North Fork and Grand Valley’s fruit story when I listened back to the recorded interviews.

Now, with the fruit ripening in the valleys and the wine pouring in the Grand Valley and West Elks AVAs, it is nearly time to talk to the people for whom I wrote the book—the people who every time they taste a peach, or tour an orchard, or sip a Cabernet they become part of the story. It is time to embrace the words of the kitchen magnet: Life Begins at the End of Your Comfort Zone. Yikes. 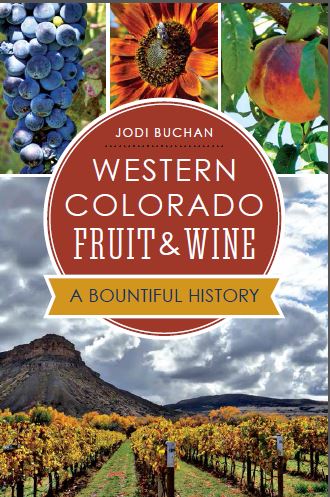